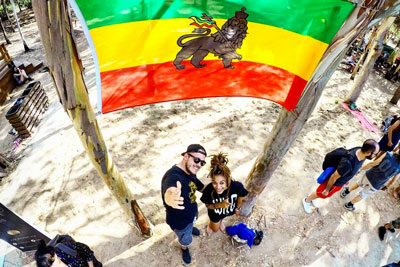 MAD CODIOUF (BE) has been working on the Reggae scene since 2001.
After several collaborations and experiences in the Reggae-Dancehall and Soundclash business, it is following a journey between Switzerland and France as well as his integration into the OBF Sound System family that he takes a turn to Dub and traditional analog mix learning Sound System Culture as boxman trough travels with O.B.F Family.
Mad Codiouf begins to explore his musical universe, compose and mix his first productions with Rico OBF blending this
traditional technique of mixing DUB with more contemporary and vanguard sounds.
After a first EP 4 tracks on free download on the label MarÈe Bass, the Belgian Dubber releases his 1st vinyl 12 inch on the label Digipirate with 2 titles Polska and Koolios as well as a 7 inch vinyl on the Italian label Dub Invasion Record in collaboration with Humble Brother And Nish Wadada.
Upcoming projects and releases with Kiangana, Omar Perry and more are stil in the making.
On his return to Belgium, he meets Frank who proposes to support him to launch the Reggaebus Sound System. In 2016, they traveled more than 5000km together in a truck to the Eastern Europe loaded with the Sound System for a series of 11 dates in 1 month in cities like Ljubljana, Zagreb, Budapest, Cracow, Wroclaw, BerlinÖMad Codiouf offers a musical journey oscillating between Reggae-Roots sounds to the darker and explosive sounds of the UK Stepper.

Kiangana is singing for about a life time, but producing is a whole new Universe to her & the people who know her as a Singer. Since 3 years she has been producing in silence. 2 december 2015 she shared her first tune “Free Bird” on Soundcloud.
For many years Kiangana sang in different groups. In Belgium.First as a backing vocalist for the soul funk group “Societe Anonyme” , later as backing vocalist in a reggae/hip hop group named “Wahwahsda”.
In 2011 she started singing as lead vocal in the Roots reggae group “Iron Ites.” They won the Benelux Reggae Contest in 2013. Before that time, she met Crucial Alphonso & the Dub scene. Longside Crucial she started singing on soundsystem, from 2009 it started to happen more often.
She worked & works with Crucial Alphonso, Saimn-i, Jah Heavy Load, Irie Ilodica, Collieman, Alpha Steppa, Dub Dynasty,
JahYu, African High Fly,Adi Shankara, Bzeuni, Mahom & many more…
In the dance she shared the microphone with Weeding Dub, O.B.F, Charlie P, Jah Heavy Load, Mahom, Dawa Hifi, Barbes D,
Askala Selassie, Dub Dynasty, Dubkasm, Alpha Steppa , Reggaebus Soundsystem, Mad Codiouf etc… For Kiangana it’s an absolute Blessing to be able to express herself true her music, not only by writing lyrics & singing them but also to produce from the very first note till the very last. Producing is healing! Music is oxygen for the world.